Less than 24 hours after landing in Chile, I was racing head-to-head on the Rio Nuble as part of Nuble Fest. Not quite how expected to be taking my first strokes in the country… in fact it had been quite a strange 24 hours. After a long flight I arrived in Temuco, only to find […]
Read full story

Halloween is my birthday. Yes, I’m a witch! And what better way to celebrate than a quick mission to Scotland with about 45 friends / friends-of-friends? With only a few days to spare (and one of them spent in A&E after an unfortunate, comedy-yet-totally-sober incident with a Giant Jenga set) we bagged only a few […]
Read full story

UK – French Alps – Lyon – French Alps – Norway – Uganda – UK – Austrian Alps – French Alps – UK What a summer! Since May I’ve been travelling around running FlowFree trips, boating with friends, filming for upcoming projects and racing, with a very tight schedule to fit it all in! Last […]
Read full story

Last week we held our third Lyon playboating course, this year using an additional slalom course with even more features to practice on. One of our students, Chris Hull, wrote this report from his experience of the week.

After weeks of trying in vein to evolve a set of gills and failing to do so, it was time to hop on a plane to France for a week’s playboating with FlowFree. As soon as we made camp at Sault Brenaz slalom course, we got on the water to show Lowri how much work she had to do! Luckily Rhod and I were at the same sort of level: able to surf and sometimes spin. We found a little wave and started to learn to flat spin better. Then moved on to a bigger wave to start on carves. After a couple of days on this course we were feeling good about everything. Most of all, my roll was working 100%! Rhod beginning to learn to blunt

By Monday, we had to move campsite as this course was closing due to dam work upstream. On the way to the new course, Saint Pierre de Boeuf, we stopped at Hawaii-sur-Rhone. I was amazed at the scale of the thing!! It was on 900 cumecs on that day, the right hand channel was flushing so we ran it far left. It was even bigger when you’re on the top just about to fly down it!! We broke out to look at the left hand channel: a smaller green wave with eddy service, but still massive compared to anything in the UK. Rhod and Lowri tried to surf it but couldn’t get far enough right to stay on. I was too scared and in awe of the size to even try to get on, but after some goading from Rhod I went for it! I got about 2 seconds of surfing… it was amazing! So I went around again, this time I got munched by the hole just behind the wave and ended up swimming… all on the gopro :(. It was a fairly long swim, but the water was warm and it’s flat for miles downstream so nothing to worry about. Plus Lowri came and saved me!

We moved on to the next slalom course, which was nowhere near as deep as the first course but had a lovely surf wave to practice carves, blunts and more importantly body positioning. There was a bigger wave/ hole (liked to change when you where in it) to hone the skills and get prepared for the speed on Hawaii-sur-Rhone. There were also a couple of holes to practice on and this is where my second and last swim happened, after achieving one of my goals for the week – rolling back up in the hole and carrying on playing. I went back in for a second go but I didn’t roll up as quick as I needed to and smacked my head, on the rock shelf that made the wave behind it. More battle scars for my new helmet. Rhod getting to grips with his blunting Surfing on the top wave at St Pierre de Boeuf Lowri playing in one of the holes

The following day, we checked the levels at Hawaii-sur-Rhone and they looked good so off we went. Lowri led us down to show where the right place to drop into it was. A quick game of rock-paper-scissors and I was in my boat ferrygliding across the top of this monster, taking big breaths praying for a easy ride. As I dropped in to it I had enough time to say “Holy **** this is a long way down” before hitting the pile and having about a 10 second surf. It was a lot more friendly than I thought it was going to be. Rhod then dropped in to it and the wave looked like it worked him hard, but he held on for a long ride and even got a half spin. The next run though I nail it… Front surf down the pile into the trough. I look to the bank and could see the wave crashing above me. Lowri said my face was a picture. It was the best ride of my life up to that point and all caught on film 🙂 Looking across at Rhod filming me. Wow this is incredible! Big smiles after an amazing surf.

Rhod missed the next two goes, so it was back to me. Now what I’m about to say is true, the other two will back (key word there) me up. As I dropped in to the wave and hit the pile my backband popped. “Crap! Just lean forward, Chris, just lean forward!” I kept saying to myself. How am I going to do this without swimming?! I rise up on the pile and get thrown into a backsurf back down the wave. It started to feel like a great run and I started to enjoy it as much as you can with an integral part of you boat not done up. I got the boat into a sidesurf then went for a big sweep stroke get myself into a frontsurf again, and to the edge of the wave which flushed me off. The drama was not over: I still had the wide whirlpool, boil-ridden eddylines to deal with! I fight my way through them and got to the beach. It was by far the best run I ever had. After lunch the level went up and the wave become flushy to catch. I didn’t mind, I’d had the ride of my life and my adrenaline was pumping! Lowri shows us some air For rest of the week we looked at improving carves and perfecting our newly learnt blunts and Rhod was on a mission to learn to flatwater loop. My confidence had rocketed this week and I’ve had the biggest smiles I’ve ever had on my face! I can’t thank Lowri from FlowFree enough for the incredible week I’ve had. Now off on the second leg of my trip… to the Alps. Last week I was running a FlowFree Playboating Development Week in Lyon. We had lots of fun and managed to catch Hawaii-sur-Rhone in good conditions as well as a couple of local slalom courses. Here’s a couple of pics from the week: One of the students on the course has written up a report of his […]
Read full story

Even Flowfree has a training montage…

Fran and Lowri had time to kill this evening (and Fran had left her running shoes somewhere) so they definitely had time for a training montage!! 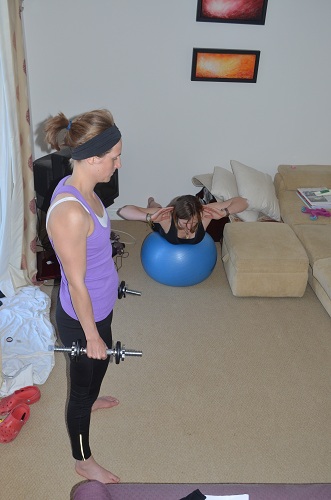 Who needs a gym.

…We put the Hippety Hop beats on and got stuck in, just wished we had wall mirrors and hunky men around too… 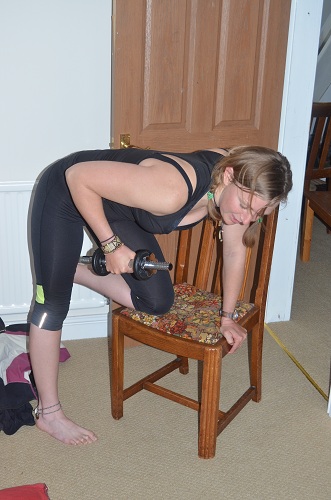 "I don't know if you heard but I've done over a thousand!" 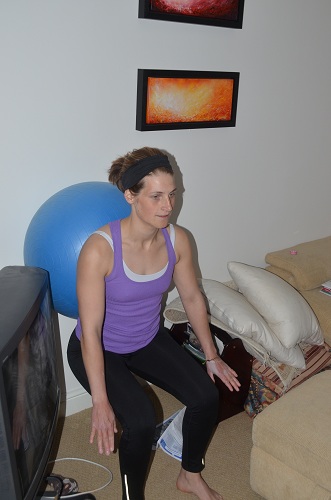 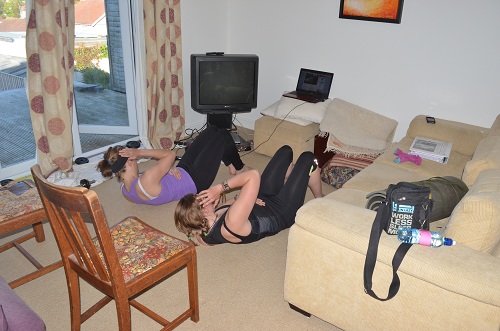 Synchronised Crunchies, it is a new Olympic sport.

Maybe this could be a new dance craze… 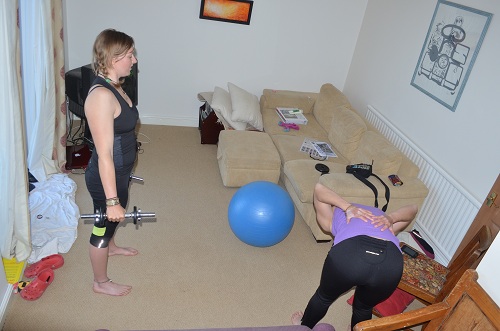 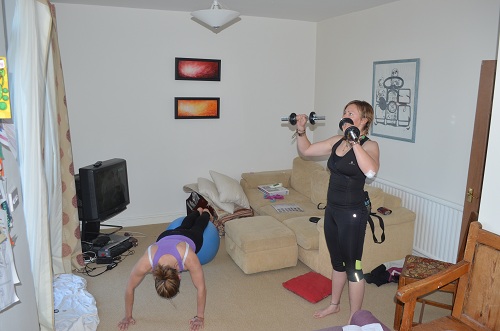 "just think of the podium!!"

Well we are going to ache tomorrow, what did you get up to?

Sorry for the blog silence! Our expedition to Colombia went really well: lots of exciting rivers in super remote and committing canyons and the odd epic to add to the adventure. We kept a detailed blog on the trip blog, so if you’ve been patiently waiting for updates here I can only apologise, but at least you can read that at your leisure. Hopefully this little video will make up for the silence here…

We are currently doing a lecture tour, dates of which can be found here – so come and hear about all the epics and adventures, see more video footage and some stunning photos. If there’s not a talk near you, please drop us a line as we are keen to add new venues!

Here’s a little teaser video from our recent Colombia expedition. If this whets your appetite, we’ll be showing more HD video along with telling tales of our epics and adventures on our lecture tour, so check out the dates and venues. And if there isn’t a talk happening near you, get in touch on info@flowfree.co.uk […]
Read full story

It’s been a couple of weeks since I got back from Colombia and with starting my lecture tour*, I’ve had time to reflect on our adventures. Rather than write a long-winded summary of our trip, I thought I’d do something different and present the highs, lows and hilarity in a “rocks and sucks” run-down. What […]
Read full story

Myself, Niamh Stack, Dave Hollins and Fran Kohn are two weeks in to our month here in Colombia. We’ve been stunned by how beautiful it is: dramatic moutains covered in thick, lush jungles and huge canyons… a landscape that makes for some very committing sections of river! So far we’ve paddled some amazing white water, including [...]
Read full story
← Previous 1 2 3 … 8 Next →