After weeks of rain and fantastic river levels in Wales, the sun came out. There were even a few days with a magical combination of both. Here’s a short video Andy made of a fun slide down the Croesor.

Want to learn how to make cool videos of your own adventures? Check out our workshop! It gives you loads of top tips and handy tools to make filming & editing more simple and less time consuming.

Inspired by the old Sunday league at Tryweryn and the current league held on the Thames Weirs, an informal playboating league is being set up in North Wales. The basic premise being to get people together to have a play and help and encourage each other while having fun!

Times and places for a playboating gathering will be advertised here and on the Dates and Events section of UKRGB, and will happen roughly every 2 weeks or so. The first of these gatherings is happening the day after boxing day (December 27th) at Mile End Mill on the Dee. Meeting 12pm for about 2 hours of boating.

The session will last 2 hours but obviously, you can paddle before and after the gathering if you wish!! It’s totally informal, so there is no single person in charge, no rules, no formal coaching, no entry fees, no paperwork… just come along and paddle with a bunch of like-minded people who enjoy going for a play, no matter what ability.

After each gathering, a “winner” will be decided by the group (the winner may be the person who did the best old school move, had the biggest smile or encouraged other people the most… whatever, the group decides!) and that person then gets to decide the time/place of the next one.

This way it does not rely on one or two people to make it happen… just whoever would like to get involved at any time; which should mean it has some longevity. We can use also a range of places and features, depending on what suits those involved. There are already quite a lot of people keen to make this happen and I hope it will create a new, friendly and approachable playboating community in North Wales.

The main idea of this is to encourage people to come along and give plaboating a go without the stress of an organised event / competition, but where there will be plenty of people around to help out and paddle with – so shake off that xmas pud and come for a play! 🙂

A few weeks ago, FlowFree were due to be at the Alpkit Plastic Fantactic / Festival of Freestyle in Nottingham for our official launch and to provide freestyle and river running coaching sessions.

We packed up and set off, all the time cursing the pouring rain. As we cruised over the Horseshoe Pass with our wipers on max, we got a phone call from Alpkit Jim “The course is rising fast; we’ll still have an event but if I was in Wales… I’d stay there!”. 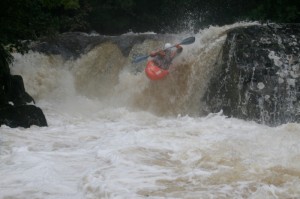 And so it was, the launch of a kayak coaching company was rained off! Over that weekend we ran 7 sections of quality whitewater (including sections of the Dee, Llugwy, Eden, Mawddach, Wnion, Conwy and Ogwen)… the rivers were stonking and we had a great time. 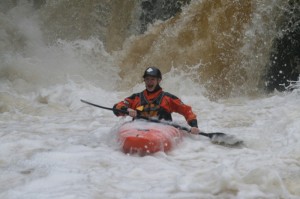 Photos thanks to Richard Watson.